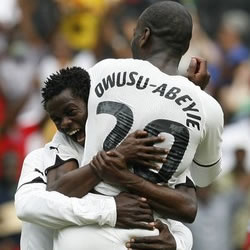 Do we have our mojo back? Did Ghana’s 1-0 win over Latvia convince fans who had lost all hope  that we will now go on and go far in the tournament? Before you head off to bet your life savings on Ghana to win the competition let us consider what went well and what did not.

First of all, we dominated the ball possession throughout the game even though the scoreline did not reflect that. And yet, we all know the difference between winners and losers is goals. We scored only one goal (two, if Asamoah Gyan’s clearly legitimate goal was given). Depending on how you look at it our record of two goals in two matches is a source of worry or nothing to worry about.

Black Stars nation should be hopeful because after a sobering loss against the Dutch, the players came back against Latvia with resolve and mental strength. They delivered a much improved and more encouraging performance. It turns out that the sky is not falling on us and one loss in a friendly does not a world cup campaign make. Of course, the reverse is the same. A pre-world cup friendly win does not guarantee success in the competition. But it helps.

Especially when the positives extend beyond showing mental strength. We found out that the Stars could actually find each other with pinpoint passes as opposed to giving the ball away carelessly.  The performance of debutante Kevin-Prince Boateng  who was playing in an unusual holding midfield role (Essien’s usual position) and the continued brilliance of Kwadwo Asamoah are something to look forward to. Both are players!

John Mensah played 59 minutes and appears to have escaped injury. Rajevac and the medical team are clearly managing his minutes with the ultimate goal of having him ready for Ghana’s crucial opening match against the Serbs.

Anthony Annan continued to impress and provided steady cover for his backline, consistently cutting out the Latvians’ attacks.

One of the few reservations I have is that the defense was not tested too much. The test we will face from the Serbs is likely to be somewhere on the scale of what the Latvians offered to what the Dutch did. Let me stick my neck out and say it will be closer to the Dutch. Therefore, it would have been useful for this ‘first team’ to deal with that kind of threat together in a real match so as to build trust. You can’t have it all though.

Despite not being threatened, Lee Addy showed versatility in switching from a center back to left back. He did not lack for pace even though that observation comes with the caveat that he wasn’t facing players of Cristiano Ronaldo or Arjen Robben’s pace and skill. Still, it was encouraging that coach Rajevac seems to have identified a player who if he has not made the case for starting can at least fill in in any event. To that end, Rajevac seems to have two outfield players for every position and this team should be able to plug in one like for like player in the case of injury or suspension.

The same cannot be said for our goalkeeping. Daniel Agyei had the chance to cement his role as the deputy to Richard Kingson but the way he flapped at a couple of crosses would make a duck proud. Rajevac would likely have serious doubts putting him in in the event Kingson was unavailable. Going back to our March friendly against Bosnia, Agyei has had the opportunities but always leaves doubt as to whether he is ready for this level of football. Unfortunately, the fact that this is our last match means we will not be able to see Stephen Ahorlu in a match situation for the Black Stars. Hopefully, the coaches have watched enough of the local leagues to get a sense of what Ahorlu can do in games. Of course, it could well be that they have watched enough games to know he is certainly not ready. I am not sure which thought is more comforting.

Ultimately though, this final test was about being healthy heading into the world cup. Apart from Sulley Muntari, there is no newly injured player a week to the start of our tournament. Provided this trend continues and everyone is fit especially John Mensah, then we can remain positive heading into the first match against the formidable Serbs. After all, the news about John Obi Mikel, Didier Drogba, Arjen Robben, Rio Ferdinand and our own Sulley Muntari shows how unpredictable a footballer’s health can be .

So, Black Stars fans, as I prepare to touch down in South Africa in the next couple of days, let’s pray for health.

2 thoughts on “Ghana vs Latvia: Recap”