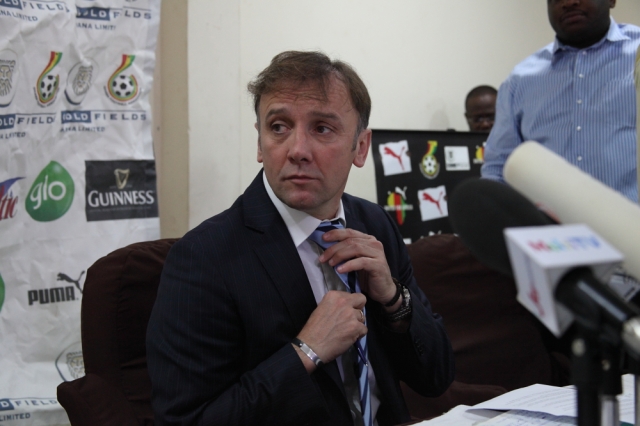 Goran Stevanovic is the new Black Stars coach. Ghana’s love affair with Serbian coaches continues and who can blame the members of the GFA? Our last two Serbian coaches have performed well and some of Ghana’s best results have come under them. First time participation in the World Cup followed by quarter-finalists in the subsequent one.

But the success his compatriot predecessors have established is double edged. The familiarity with Serbians may have given Stevanovic an edge in the eyes of the search committee. Yet, it may be the thing he has to worry most about. The high bar Ratomir Djukovic and Milovan Rajevac have set may be the thing that kills him.

He steps in at a point where Ghanaians’ thirst for an African Cup is at its highest. And who can blame the fans. 28 years and counting. So, as the GFA officials hand him the baton, they have probably whispered into his ear, “African Cup of Nations.” His task getting to that elusive fifth title will not be easy. His first competitive game will be away to Congo Brazzaville and unlike Rajevac there is not much room for experimentation and error. So far, Sudan has proven an able foe with their goalless draw in Kumasi an example. Congo, if their 2010 African Cup of Nations campaign is any indication, will not be easy to play at home.

Oh and did I mention that a few days after the important qualifier against Congo, Ghana has a high-profile friendly? That is if you can call Ghana vs England a friendly. The Ghanaian fans will desperately want to win against our former colonial masters and teach them a footballing lesson.

So, Goran, meet baptism. Of FIRE! The Wednesday press conference where the usual ritual of doubting who you and what credentials you bring will seem tame. No. That press conference will be child’s play. The pressure to continue winning matches in the short term and championships in the long-term may suffocate you.

But then again, he may have seen it all already. When the shortlist of five coaches was released, I was intrigued by Stevanovic’s inclusion and I did a search on the internet. What struck me was that he had accumulated varied experience. Unlike Marcel Desailly, the hot favorite at the time, he had been an assistant coach at the national team level (Serbia and Montenegro) and at club level (Partizan Belgrade). He subsequently rose to the head coaching position of Partizan Belgrade and resigned after a  short stint as the main man.

He will be under pressure to deliver immediately. There is no guinea pig phase for him and that is what I worry about the most.

One thought on “…And it was down to UNO”