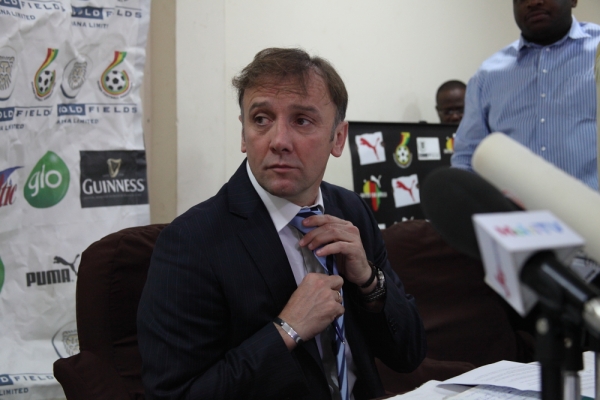 The time for tying up loose ends is over. Can Goran Stevanovic lead his men towards a championship? The journey starts now

The truth is after following Goran Stevanovic for a little over a year, even those close to the team must be struggling to predict his full line up before today’s match against Botswana. If this story is true then this will be the latest in his ever-changing line up. Given that the Stars camp continues to be shrouded in secrecy expect the unexpected.

Nevertheless, the uncertainty from game to game makes his line up the most intriguing thing to look out for. To quote Donald Rumsfeld, there are known unknowns and known knowns. We start with the known knowns. There will be 11 men on the field at the start of the match for Ghana.

Now that we’ve got the obvious out of the way, I can also say any website that puts Isaac Vorsah in a probable line-up can’t have seen Rumsfeld’s memo or they simply didn’t do enough research. He is suspended for two matches.

Adam Kwarasey will be in goal, all things being equal. John Paintsil and John Mensah will join him in defense. In the midfield, Sulley Muntari and Emmanuel Agyemang Badu are certain starters along with Dede Ayew.Asamoah Gyan is likely to lead the attack as all indications are that he has fully recovered from his hamstring woes. Who knew horse placentas were so magical? The question is how match fit is he? The number of minutes he plays will be an indicator of whether he is 100 percent.

Which leads us to the known unknowns. Someone will have to play on the left side of defense. My guess is it’s going to be between Daniel Opare and Masawudu Alhassan. Then again, the earlier link suggests otherwise.

Another of my top things to look out for will be the performance of Adam Kwarasey. This will be Kwarasey’s first major tournament since his call up to the Black Stars. While he has proven himself in friendlies and a few competitive matches, the pre-tournament friendly against South Africa might have provided some cause for concern. He conceded a soft goal early in the match. Has he put that behind him or will his nerves be frayed? Will Ghanaians regret ostracizing Richard ‘Olele’ Kingson?

Who starts in midfield with Agyemang Badu, Muntari and Dede Ayew? The answer depends on what formation Stevanovic starts with. My bet though is on Derek Boateng but some websites suggest Anthony Annan gets the nod.

Also, does Ghana go with two forwards or one? If two, Jordan Ayew will likely join his brother in the starting line up while partnering Baby Jet upfront. If one, Samuel Inkoom might be preferred on the right wing for his speed on the wings and ability to track back defensively. Jordan could still make the starting line up but as a winger.

Speaking of defense, if the game against South Africa is anything to go by then John Boye gets the nod in Vorsah’s place. Regardless of who starts, the sense is Ghanaians are looking forward to a convincing performance by the Stars. As one of my twitter followers put it, “Black Stars are probably our only national pride at this point.” Perhaps an exaggeration but an indication that the Stars provide much needed relief from life’s daily struggles for many Ghanaians.