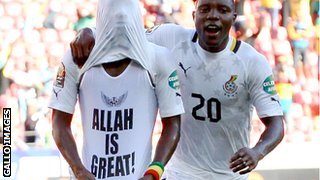 Ghana’s much needed win over Mali represents a triumph of a collective will and determination over style. Mubarak Wakaso’s 38th minute penalty lifted the Ghanaians over the Malians in an Afcon group game for the second year running.

Coach Kwesi Appiah made a few changes to start this game, moving Kwadwo Asamoah into a midfield role and putting Harrison Afful at left back. Blonde-haired Isaac Vorsah returned to the starting lineup ahead of Jerry Akaminko while Rabiu Mohammed came in for Derek Boateng.

The changes worked in restoring balance to the side. All these players slotted in to their natural positions and allowed Appiah to set up the team in a more compact way, a recognition of our defensive weaknesses in the first game. Further, Appiah had decided that Mali’s main threat was Seydou Keita and packed the midfield to counter his threat. Talk about cutting off the head of the snake and cutting off supply to the Malian forwards. It worked as Mali resorted to long balls that the central defenders dealt with relatively comfortably. Vorsah’s contribution was hard to ignore as long ball after long ball was met with blond plaits.

Aesthetically, neither his hairstyle or the way the Stars played was pleasing but given the result, it was a good strategic adjustment, which harkened back to the days of Milovan Rajevac’s famed one goal project. Perhaps this is a belated acknowledgment by Appiah of one of his former bosses tactics.

Appiah has also found in Albert Adomah and Mubarak Wakaso, player with pace who can provide width on the flanks. Adomah especially is willing to attack and defend and has provided some telling crosses into the box for forwards to run onto. Unfortunately for Wakaso and Adomah, our forwards have been a tad late on some of those crosses but the threat is still important.

In the end though, it is the three points that mattered. Ghana sits atop the table with four points with a final group game against tricky Niger to come. More importantly, Appiah and his troops get a first Afcon 2013 win and now they can build their confidence and relax and play a more well rounded game.